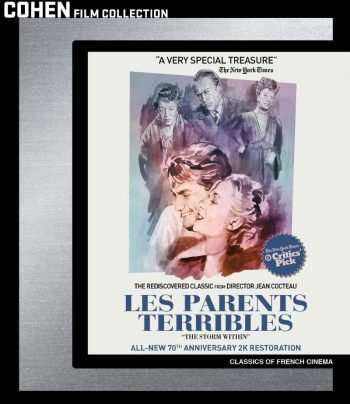 Based on Cocteau’s play, the story centers on the trials and tribulations on a family whose lives are changed due to a simple twist of fate. Yvonne (Yvonne de Bray) is the family matriarch who dotes over her son Michel (Jean Marais), but his affections expand beyond the nest after he becomes involved with a young woman (Josette Day from Cocteau’s Beauty and the Beast). Complicating matters is that lady has actually been seeing Michel’s dad Georges (Marcel André)! Cocteau cites Les Parents Terribles as his “greatest success” in cinema.

Special features on the disc include the theatrical re-release trailer, original camera tests and a filmed introduction.