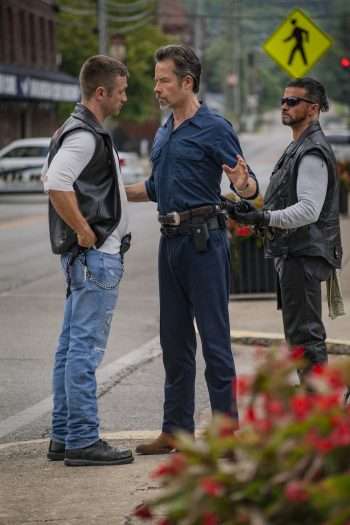 Disturbing the Peace centers on Jim Dillon (Guy Pearce), a small town marshal who hasn’t carried a gun after a tragic shooting occurred while he was a Texas Ranger. When a vengeful man named Diablo (Devon Sawa) rolls into town with his gang, Jim must find a way to outwit these cutthroats to ensure the safety of the townspeople.

Disturbing The Peace, though a modern film, also has has Western elements in its narrative, and for director York Alec Shackleton this action thriller exists as more than just a visceral thrill.

“It’s hard for me to build scenes just based on visuals alone,” said Shackleton, who previously helmed the underrated Nicolas Cage feature 211. “I really tend to build these scene structures off of what are these underlying character bumps and what are the overall arcs and how are they working? I still take it back to a lot of the original teaches that have somewhat have been lost or somewhat are not as big of a concern for (some) filmmakers.”

Click on the media bar to hear Shackleton talk about what makes Guy Pearce a unique actor:

Disturbing the Peace hits theaters, Digital and On Demand on January 17.