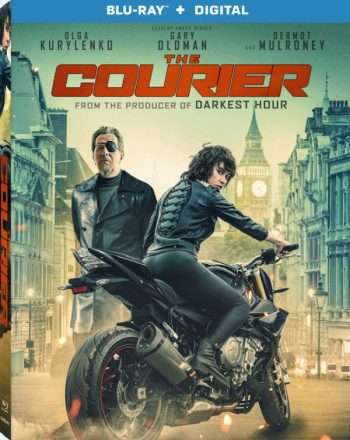 The Courier, an action thriller which stars Oscar winning actor Gary Oldman (Darkest Hour) and Olga Kurylenko (The November Man), hits Blu-ray, DVD, and Digital on January 21 via Lionsgate. The title is now available On Demand.

The plot centers on a crime boss named Ezekiel (Oldman) who plans to kill a witness (Amit Shah) who can put him behind bars. When he hires a motorcycle courier (Kurylenko) to unknowingly deliver a poison gas bomb, things seem to be going swimmingly until the courier saves the witness. The feature co-stars Dermot Mulroney as an agent who is determined to bring Ezekiel to justice.

Oldman has been in his share of prestige productions, so it’s fun to see him partake in pure popcorn entertainment (he was seen earlier this year in Killers Anonymous, playing a therapist to killers!). Watching Kurylenko headline an action movie should also make for a fun watch. The picture is directed and penned by Zackary Adler, whose film credits include I’m Reed Fish and Casual Encounters.

Are you going to give The Courier a shot? Feel free to comment below!