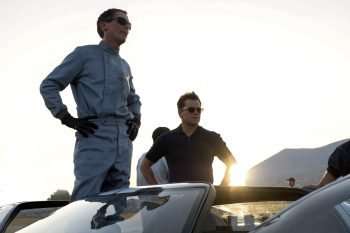 To say that both Christian Bale and Matt Damon are accomplished actors is an understatement. After all, the two have earned nine Oscar nominations between them, and each has won once. The two of them are starring in Ford v. Ferrari, the true story of a car designer and driver who work together to help Ford build a race car that can rival the Ferrari. Playing a scientific “suit” and a daredevil driver, respectively, Damon’s and Bale’s characters couldn’t be much more different. That was fine, Bale told us, because the two of them also have drastically different acting styles, and that helped build a natural tension between the characters. (Click on the media bar below to hear Christian Bale)