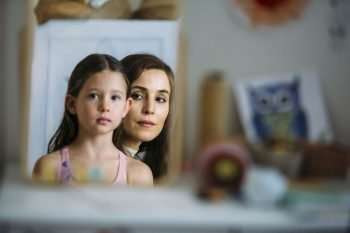 As witnessed in Strangerland and Angel of Mine, director Kim Farrant has a knack for crafting raw and resonate tales of humanity within the seeming constrictions of genre storytelling.

Angel of Mine features Noomi Rapace as a woman who believes her daughter is actually alive and being raised by another couple (Yvonne Strahovski, Richard Roxburgh). Her daughter died in a fire years ago, but that doesn’t stop her from continuing to insinuate herself into this family’s life and eventually reclaim her supposed child.

Though one can initially view Angel of Mine as a stalker infused suspense thriller, it rises above that genre’s often predictable path. Part of the film’s strength lies in Rapace’s performance. “It’s extraordinary to work with actors who are so willing to be exposed and so vulnerable and seen in all the dark extremities and light of their humanity,” said Farrant, who also garnered excellent work from Nicole Kidman in Strangerland. “It’s both thrilling to experience but it’s also a process as well. My job is to create a safe space for those actors so they can feel like they can unravel.”

Click on the media bar to hear Farrant elaborate on her collaboration with Noomi Rapace:

Angel of Mine hits select theaters and On Demand August 30. 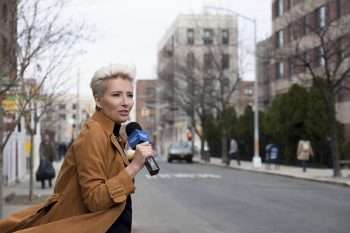 “I loved everything about it because it was a whole,” said Thompson, an Oscar winner for her screenplay for Sense and Sensibility. “It’s so rare. You’ll read a script and one character will be good but every single character was finely tuned and very funny. I loved the fact that it was completely authentic.”

Click on the media bar to hear Emma Thompson talk about the horrible notion that women aren’t funny: 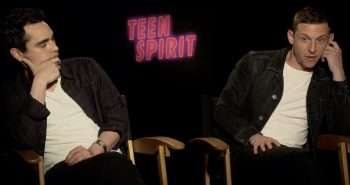 Elle Fanning stars in Teen Spirit as Violet, a teenager who is determined to enter a singing competition and thrive against the odds. The project marks the successful feature debut of Max Minghella (The Handmaid’s Tale), who shot the drama in the Isle of Wight (where his late father, director Anthony Minghella, grew up).

Jamie Bell, seen earlier this year in Donnybrook, is an executive producer on Teen Spirit, and he has been friends with Minghella for over 15 years. In the video below, the pair discuss what makes their collaboration tick: 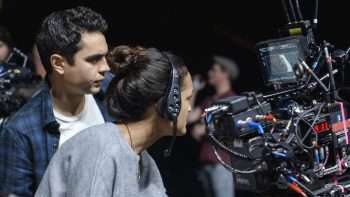 Max Minghella makes his writing and directing debut with Teen Spirit, the story of a Polish teenager named Violet (Elle Fanning) who enters a singing competition. Desperate to get out of her small town, Violet befriends an ex-opera singer (Zlatko Buric) who ultimately becomes her friend and mentor.

The movie was shot in the Isle of Wight, the island where Minghella’s late father, director Anthony Mingella (The English Patient) grew up. Though it would be easy to claim DNA as a reason for Minghella’s skill at directing, that would be just a sliver of the story. Teen Spirit, which features Fanning in one of her finest performances, also boasts, along with healthy share of excellent pop songs, a distinct and immersive visual style.

During the interviews we asked Minghella about what makes Elle Fanning a great actress. Producing partner Jamie Bell is also in the video. 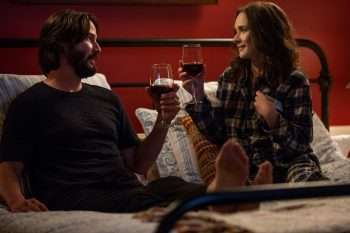 Winona Ryder and Keanu Reeves first worked together in Bram Stoker’s Dracula, all the way back in 1992. They came together again in 2006 for A Scanner Darkly, and now they’re back together again in a new comedy, Destination Wedding. When we spoke to Ryder and Reeves, they told us their long history as co-workers and friends certainly helped them create good chemistry as a couple coming together under less than ideal conditions. 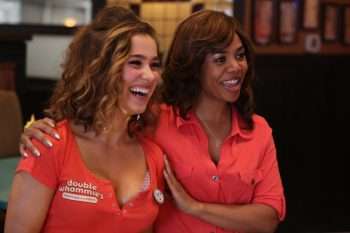 Regina Hall’s career has been filled with its share of hits (including the Scary Movie franchise, The Best Man, and most recently Girls Trip), and now she headlines the critically praised indie comedy Support The Girls.

Penned and directed by Andrew Bujalski, Support The Girls centers on Lisa (Hall), the nurturing manager of a sports bar named Double Whammies. The waitresses are tasked with wearing low cut uniforms and serving their share of ogling customers, and it’s Lisa’s job to keep everyone’s head above water, even if it means placing her own job on the line.

In the video below, Regina Hall gives a brief mention to a previous indie film she worked on (People Places Things) and discusses how she approached her character in Support The Girls.