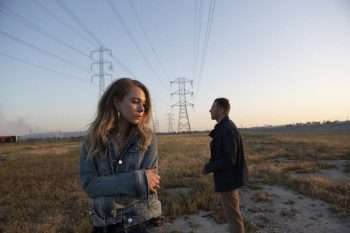 Lost Transmissions centers on Hannah (Juno Temple) a songwriter who attempts to help her friend Theo (Simon Pegg) navigate through his battles with schizophrenia. Theo, a respected record producer, inspires Hannah to dive deeper into her music, so on one level he is bringing some much added value to her career. Hannah ends up being Theo’s go-to friend during his times of crisis, and his situation is worsened by his continuing refusal to take his medication.

Directed and penned by Katharine O’Brien, this Los Angeles set story features lived in performances by Pegg and Temple. The feature’s script, inspired by O’Brien’s own experiences with helping a friend in need, comes from a real place. When effectively done, such stories develop in an organic (and not plot driven) fashion.

“I just believe that you have to be true to your maxim of what you’re trying to tell,” said O’Brien. “The DNA that’s inherent to the core of your story. That should inform the plot and that should inform the structure. This film is really about this (space) between these two people who are trying to communicate but really can’t, so there are long takes that lets that awkwardness play out. It’s asking the audience to engage (with the story).

Click on the media bar to hear O’Brien discuss why Juno Temple was “perfect” for the role of Hannah:

Lost Transmissions, co-starring Alexandra Daddario, is now playing in theaters and is available On Demand. 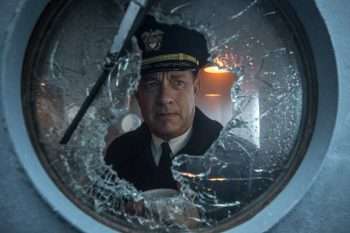 Tom Hanks penned the script and stars in Greyhound, a WWII set thriller that is based on the C.S. Forester novel The Good Shepherd.

Captain Ernest Krause (Hanks) is a commander whose destroyer is placed in the middle of a perilous battle with a slew of Nazi U-boats. With limited help from Allied aircraft, the odds are against the USS Keeling making it out of this fight in one piece. Aaron Schneider (Get Low) directs the feature which co-stars Rob Morgan and Elisabeth Shue. With Saving Private Ryan and Band of Brothers (Hanks produced the series with Steven Spielberg) under his belt, Hanks knows how to craft a war film. Check out the trailer and tell us what you think! 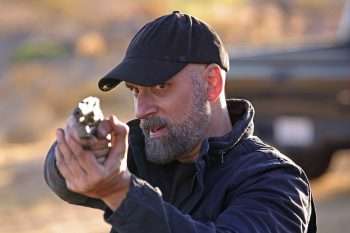 Directed by Justin Lee, Final Kill centers Mickey Rome (Ed Morrone) a sarcastic mercenary who is tasked with protecting a couple in Central America. Rome has his work cut out for him, as the lovers are holed up in a beautiful mansion that should be an easy target for the crime organization that’s looking for blood. Final Kill also boast an array of go-to character actors (Billy Zane, Randy Couture, Danny Trejo, Johnny Messner) to flesh out the narrative.

In the past several years, Lee has directed a healthy array of films (including the 2019 Western Badland), and he is not a director to sit and wait for the material to find him.

“Whether that’s (filming) something larger or going out with my own money and making a $10,000 film,” said Lee. “I will continue to do that to keep the ball moving forward and keep working. I’ve made a couple of larger films in a sense but they are still small indies. I usually am only operating with small capital in movies so it’s trying to always make something larger than what you really have. That’s always a struggle.”

Click on the media bar to hear Lee discuss how such 1980s films as 48 Hrs. and Midnight Run helped influence the comedic tone that’s layered into Final Kill:

Final Kill hits theaters, On Demand, and Digital on March 6. 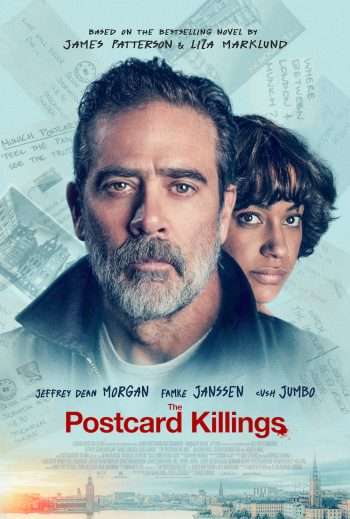 Based on the bestselling novel by James Patterson and Liza Marklund, The Postcard Killings centers on New York Detective Jacob Kanon’s (The Walking Dead’s Jeffrey Dean Morgan) search for the person (or maybe killers?) involved in the London murder of his son-in-law and daughter. The picture is directed by Danis Tanovic (Death in Sarajevo, Tigers).

Before his recent success on The Walking Dead, Morgan toplined the short-lived series Magic City and also had a memorable recurring role in Grey’s Anatomy. On the feature film side, Morgan has starred in Watchmen, The Losers, and the underrated thriller Desierto.

Movies that have been adapted from James Patterson’s work includes Alex Cross, Kiss The Girls and Along Came A Spider. Marklund’s novels Nobel’s Last Film and Paradise have been turned into films (she penned the screenplay for both).

The Postcard Killings, co-starring Famke Janssen and Cush Jumbo, hits theaters, On Demand, and Digital on March 13. Check out the trailer and tell us what you think! 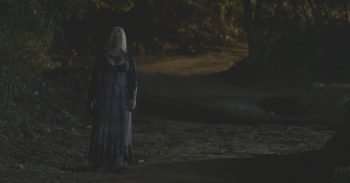 Directed by Andy Palmer, Camp Cold Brook centers on a reality show host named Jack Wilson (Chad Michael Murray) who, along with his crew (Danielle Harris co-stars as his producer), investigate a camp that is reportedly haunted. Campers were drowned in a nearby creek some 20 years ago, and Jack is determined to uncover this mystery (or at least revive his soon to be canceled show).

Palmer  had the benefit of collaborating with filmmaker Joe Dante (Gremlins, The ‘Burbs) for Camp Cold Brook, as Dante served as an executive producer on the project. During his early years in the industry, Dante worked with producer Roger Corman, and that mentorship has had a marked influence on his respective career. Thus, helping independent movies is a passion of Dante’s.

“At my company Renfield, we’ve been on occasion, getting involved with backing independent pictures that are made by people who can use a little help trying to get them set up,” said Dante. “When this script came along, my partner Mark Alan and I thought that this was probably a pretty good bet as something we understand and could contribute to and hopefully get made. The whole business now is about trying to get your picture made.”

Click on the media bar to hear Dante talk about how he appreciated the steady and suspenseful approach to Camp Cold Brook’s narrative.

Camp Cold Brook is now playing in select theaters and is available On Demand and Digital. 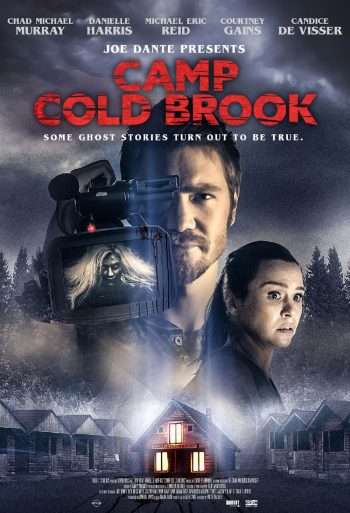 Camp Cold Brook centers on Jack (Chad Michael Murray), a reality host who, along with his crew (horror favorite Danielle Harris, Candice De Visser, MIchael Eric Reid), investigate a summer camp that may be haunted. A group of young campers were drowned in a nearby creek 20 years ago, and these content producers are desperately looking for a good story to shoot (their program is on its last legs).

One of Camp Cold Brook’s strengths lies in its focus on the suspense and mystery elements of horror, so gore and excessive violence are missing from this feature.

“I love that idea of pulling the slasher out of the camp and making the camp haunted with these creepy kids running around,” said Palmer. “I like this idea of this witch that lived on the outskirts. It just had a good mythos to it. It was just a matter of working with (screenwriter) Alex Carl and crafting what we thought were really good scare moments.”

Click on the media bar to hear director Andy Palmer discuss how he wanted to visually flip the script with Camp Cold Brook: