What Will We Do Without Jerry Lewis On Labor Day? 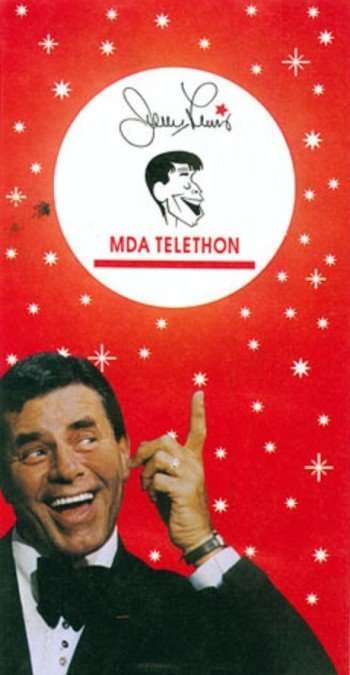 For the second time in over 40 years, JERRY LEWIS won’t be hosting the annual muscular dystrophy telethon that has, for better or worse, become a Labor Day television mainstay. Despite last year’s negative reaction to the news that he’d not been invited to perform his signature theme song, “You’ll Never Walk Alone” and the shocking reveal that the legendary 85-year-old comedian was unceremoniously dropped by the program for reasons that remain as clear as mud, the powers that be at the helm of the program are steadfast in their decision not to use the former host. Abrasive, egotistical and sometimes offensive, LEWIS has been called-out over the years for insensitive remarks towards gays and women but no one has ever disputed his relentless work and fund-raising efforts on behalf of those who have become known as “Jerry’s Kids.”
At a press conference we attended just last year, LEWIS talked about how the show biz industry is changing and why he feels alienated from it. (CLICK ON THE MEDIA BAR FOR AUDIO)
Get the Flash Player to see the wordTube Media Player.
THE MDA SHOW OF STRENGTH begins airing this evening 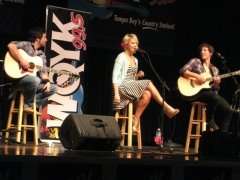 “We really love this campaign. We know what it’s like to be away from home. Being able to connect our soldiers with their loved ones back home and play for these students who worked so hard for this cause is a win-win all the way around,” said Linsey.
“It was cool that Chevy supported this campaign and of course we love our friends at WIRK and WQYK who helped promote it,” said Jones.
Steel Magnolia treated over 1,000 students at both schools to a free concert that included a performance of the Top 10 smash, Keep On Lovin’ You, and their current single, Last Night Again. 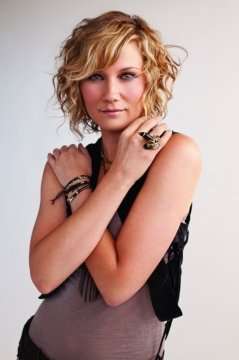 Grammy-winner and lead singer of international super-duo Sugarland, Jennifer Nettles announces the Attic Community Playground online auction, which began yesterday and will run through May 11, on CharityBuzz.

Bid on your chance to see and/or meet some of music’s hottest names during the 2011 tour season.
Contributions from Katy Perry, Carrie Underwood, Sheryl Crow, Jon Bon Jovi, Keith Urban, Kid Rock, Kenny Chesney, Reba McEntire, Martina McBride and Sugarland are all being featured with proceeds from the auction going to benefit the Attic Community Playground which helps provide music education opportunities for kids.
“Art programs within schools…band, chorus, drama, art…continue to be cut”, said Nettles. “This is an extremely sad fact not only because I enjoy a career in the arts, but I enjoyed and benefitted from studying the performing arts as a kid. ACP hopes to help provide students with opportunities for experiencing and studying the arts so they can develop their self-expression, emotional exploration and self-confidence.”
To view details and bid on the chance to see and/or meet these incredible artists visit http://www.charitybuzz.com/auctions/attic. 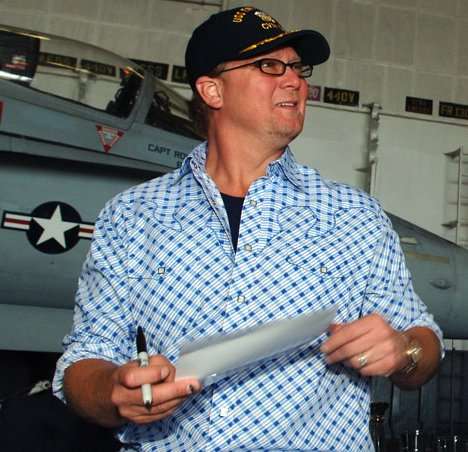 As part of his personal initiative to give back, Lawrence, along with his friends in sports and entertainment – Darryl Worley, Brad Arnold (3 Doors Down), Ira Dean (former Trick Pony member), Keith Anderson, Bryan White, Matt Gary, Ty Brown (of The Bachelorette fame), Cory Hildreath (One Night Rodeo), Davis Daniel, Elbert West, Lacey Brown and more–will raise money for Komen Greater Nashville spending the day on the greens as comrades in mission and play.

After a challenging 18-hole game, the Golf For A Cure outing will be followed by a celebratory reception.

An awards presentation will take place during the reception, along with silent and live auctions and an up-close acoustic concert featuring Lawrence and friends.

The entry fee for the day (including game, lunch and show) is $225 per player. For a mere $50, music enthusiasts can enjoy the show-only. The price of admittance includes free beer, vodka and rum beverages (provided by Pinnacle Liquors – while supplies last). The event will be held at Five Oaks Golf & Country Club in Lebanon, Tennessee.

Big tag silent auction items include an authentic, autographed Nolan Ryan Rangers‘ jersey and photograph and a Fender Squire electric guitar autographed by the members of 3 Doors Down.

One hundred percent of the proceeds will go directly to Susan G. Komen Greater Nashville. 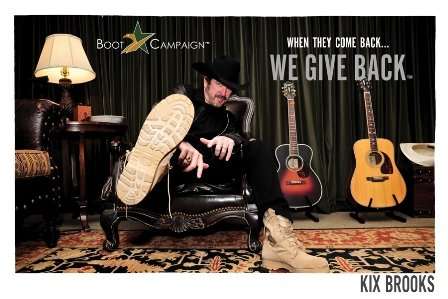 Kix Brooks, half of the super-duo Brooks & Dunn, is setting his trademark cowboy boots aside to help U.S. Servicemen and women returning from combat.

The boots are part of a national initiative called the Boot Campaign where Brooks is the featured celebrity this week at www.bootcampaign.com.

Proceeds from every pair of boots sold through the Boot Campaign go to charities that help military members and their families cope with physical injuries and Post Traumatic Stress Disorder.

For two decades, Brooks was half of  Brooks & Dunn, the highest selling duo in country music history.  The duo sold more than 30 million records, scored 23 number one hits and won an impressive 80 major music industry awards.

Kix Brooks serves on the boards of the Country Music Association and Vanderbilt Children’s Hospital.

SANDRA BULLOCK AND GWEN STEFANI GIVE MUCH

Of the many celebrities who are donating much for the victims of the multiple disasters in Japan, Sandra Bullock and Gwen Stefani have been two of the most generous and earliest of the supporters.

“The American Red Cross is extremely grateful for this generous support from Sandra Bullock and her family,” the American Red Cross said in its statement. “This contribution is vitally important as the Red Cross works to provide critical assistance and essential relief items in this time of urgent need for so many people in Japan.”

Gwen Stefani gave $1 million to Save the Children. “I’ve been inspired by Japan for many years and have a true love, appreciation and respect for the Japanese people and their culture,” Stefani said. “The disaster in Japan is beyond heartbreaking and I want to do anything I can to help. I would never be able to make a gesture like this without the love and support of all the fans over all these years.”