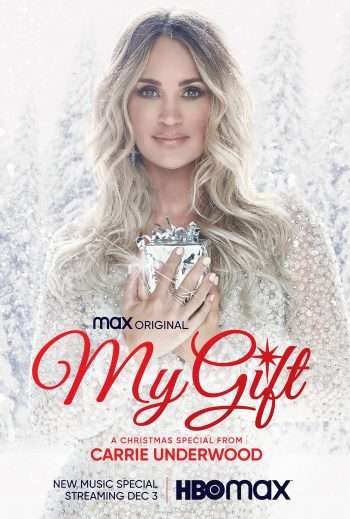 On Thursday, Dec. 3, HBO Max is spreading holiday cheer with the debut of Carrie Underwood’s new music special “My Gift: A Christmas Special From Carrie Underwood.” In the Max Original, Underwood performs a combination of beloved traditional favorites celebrating the joy and hopefulness of the holiday, as well as new original material from her first ever full-length Christmas album My Gift, which was released earlier this fall. On the special, she is accompanied by her band, as well as a live orchestra and choir, conducted by Underwood’s longtime friend, Emmy® Award-winning musical director Rickey Minor.

The special features many heartfelt moments and performances, including a duet with John Legend, singing “Hallelujah,” an original song he co-wrote with Toby Gad, which appears on her My Gift album. Viewers will also get an inside look behind the scenes of Underwood recording “Little Drummer Boy” with her five-year-old son Isaiah.

“My Gift: A Christmas Special From Carrie Underwood” will be available to stream starting Thursday, Dec. 3 on HBO Max.

“I’m thrilled to be collaborating with Playtone and HBO Max to bring My Gift to life,” said Underwood. “Just like the album, I hope this special will help bring some much-needed joy and become part of the soundtrack to people’s holiday festivities this year as it streams throughout the season and beyond.”

“My Gift: A Christmas Special From Carrie Underwood” is executive produced by Gary Goetzman and Tom Hanks for Playtone – which has garnered 52 Emmy Awards and 107 nominations – along with Underwood and her manager, Ann Edelblute. The special is directed by Emmy nominee Sandra Restrepo, with production design by Tom Lenz and wardrobe styling by multiple Emmy Award-winning costume designer Marina Toybina.

“This special is an homage to the classic, timeless holiday specials, highlighting the vocal gifts of the incomparable Carrie Underwood,” said producer Goetzman. “She’s an artist who transcends genres and shows here why audiences love her around the world.”

Although Gillian Anderson spent part of her childhood growing up in the UK, she admits she never really paid much attention to the British...
Read more

Through its two stints as Roseanne and its current incarnation as The Conners, ABC's family comedy has been able to sustain its audience literally...
Read more

Let Him Go pairs up Diane Lane and Kevin Costner as a retired married couple who search for their missing grandson. Its Western setting...
Read more

The Trial of the Chicago 7 is based on events that happened more than 50 years ago, stemming from the protests and arrests at...
Read more

The Harry Potter franchise brought Daniel Radcliffe immediate fame. With that fame came both the perks and pitfalls of being a celebrity. And sometimes,...
Read more

A year after the explosive events of last season, England finds itself embroiled in a devastating civil war, with the powerful, neo-fascist Raven Union,...
Read more

With less than a month remaining until the general election, HBO Max has revealed the trailer for A West Wing Special to Benefit When We All Vote,  which...
Read more
Facebook
Instagram
Pinterest
RSS
Twitter