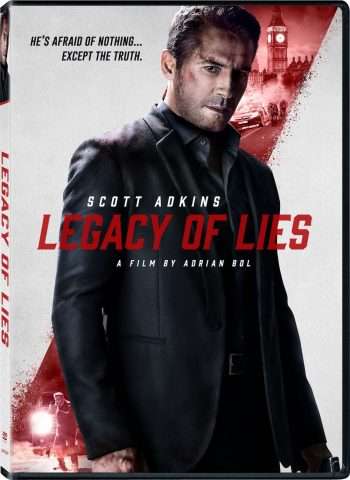 Scott Adkins headlines Legacy of Lies as Martin Baxter, an ex-MI6 agent who is tortured by a past operation gone wrong. He’s ultimately pulled back in by Russian and UK agents who are both looking to retrieve an important file. While trying to keep a step ahead of the game from both parties, Baxter is also attempting keep his daughter Lisa (Honor Kneafsey) safe.

Directed and penned by Adrian Bol, Legacy of Lies features its share of explosive action sequences, but thankfully there is also an interesting story to anchor the narrative.

“To be honest I choose scripts not really (as an actor),” said Adkins. “I think some actors choose scripts based on the part and the type of characters they want to have a chance to play but I always choose films based on what I think the film will be like. I think more like a filmmaker than an actor in some ways. I read the script and I was very impressed with what I read and then when I knew that Adrian Bol was going to be directing it as well I was more excited. I love it when you have a writer/director because they really own the material.”

Click on the media bar to hear Scott Adkins talk about getting his work ethic from his parents:

Legacy of Lies is now available on DVD, Digital, and On Demand.