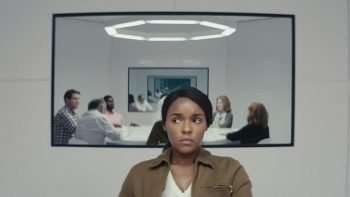 While the second season of Homecoming takes place in the same location and universe as the first, nearly everything else has changed. Though Julia Roberts is still an executive producer on the show, she is not its star in Season 2; instead, Janelle Monae has joined that cast and gets top billing. While Monae has been acting for a few years now — she co-starred in two Oscar Best Picture nominees, Hidden Figures and Moonlight, in 2016 — she’s still best known for her music career. Homecoming marks the first time she’s been more than a guest star on a television series, and she told us she’s ready for the challenge because she’s not just a singer-turned-actress, she’s a trained actress who can also sing. (Click on the media bar below to hear Janelle Monae)