Ethan Peck Was Almost Spooked By The Idea Of Playing Spock 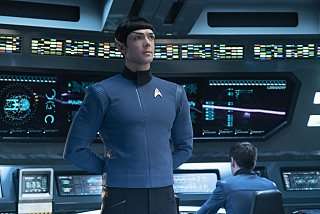 During its second season, Star Trek: Discovery made the interesting decision to revisit the U.S.S. Enterprise during its days before James T. Kirk came on board as its captain. The decision was also a well-received one. Discovery’s interaction with young versions of Mr. Spock and Captain Christopher Pike has given rise to a spin-off series, Star Trek: Strange New Worlds. As he did on Discovery, Ethan Peck will play the younger version of Spock. When he first took the role on Discovery, Peck admitted to us he was a little bit unsure whether he was ready for the responsibility of playing such a beloved character. (Click on the media bar below to hear Ethan Peck)

Since we don’t know when the studios will be getting back to work, we’re not quite sure when Star Trek: Strange New Worlds will premiere. Stay tuned.