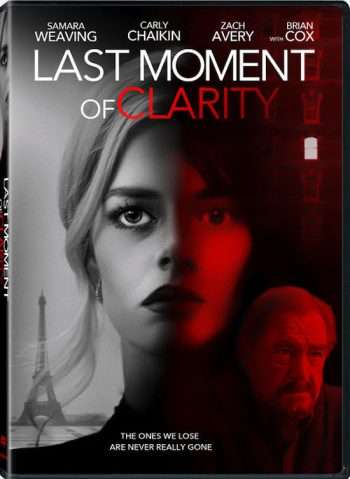 Written and directed by Colin and James Krisel, Last Moment of Clarity centers on Sam (Zach Avery), a man who is haunted by the death of his girlfriend Georgia (Samara Weaving).

Living in Paris with a bar proprieter (Brian Cox) as his only trusted friend, Sam spots a woman in a movie who looks exactly like his late lover. Boarding a plane to Los Angeles, he attempts to track down the mystery woman and an old acquaintance (Carly Chaikin) helps him on his quest.

The filmmakers impressivly doubled Norfolk, Virginia for Paris and Los Angeles for their Hitchcockian thriller.

“I think these two brothers are rather clever,” said Cox. “I was impressed by their gift more than anything else. They were very nice guys. I also did it as a favor of a friend of mine – producer Stephen Israel who asked if I could do it and I said ‘okay.’ I had an idea about the character so it fit all very well.”

Click on the media bar to hear Cox talk about why Colin and James Krisel could be this generation’s Coen Brothers:

Last Moment of Clarity hits DVD, Digital and On Demand May 19 via Lionsgate.