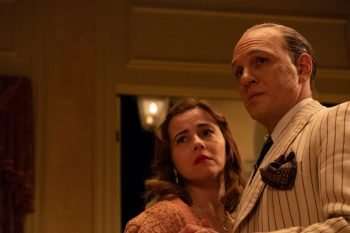 Director Josh Trank (Chronicle) teams with Tom Hardy in Capone, a surreal and creatively inspired look at the last year of the Chicago mob boss’ life.

Suffering from neurosyphillis in his Florida mansion and cared for by his wife Mae (Linda Cardellini), Capone’s physical and mental health is deteriorating at a rapid pace. Believing he has hidden $10 million somewhere in the nearby Florida swamp, Capone’s relationship to fantasy and reality has become blurred.

For Capone to work, the ambitious feature partly hinges on a successful collaboration between Trank and Hardy. “With Capone, I didn’t have anything to lose, and I was working with an actor in Tom Hardy who’s become one of my best friends,” said Trank. “I’ve known him now for almost four years. When you’re riding along with somebody like Tom, you know you’re they’re going to go all the way.”

Capone’s stellar ensemble also include Matt Dillon (he plays an old friend of Capone’s), and Trank talked about working with the talented actor.

Capone is now available on all major On Demand and Digital platforms.