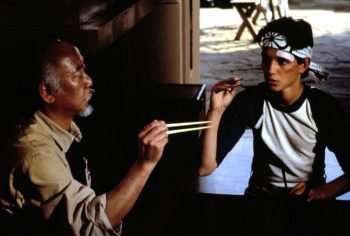 After winning praise as part of Francis Ford Coppola’s ensemble cast in The Outsiders, Ralph Macchio was ready for his first Hollywood starring role. And what a role it was! The Karate Kid was a breakout hit in 1984 and spawned a franchise that still lives on, thanks to the YouTube series Cobra Kai. Of course, as young karate student Daniel LaRusso, many of Macchio’s most memorable scenes were with his beloved and devoted sensei, played by veteran actor Pat Morita. All these years later, Macchio still remembers what a great impression Morita made on him as a young actor. (Click on the media bar below to hear Ralph Macchio)

The Karate Kid movies are now available for streaming through most digital platforms, and they’re available on DVD or Blu-Ray.