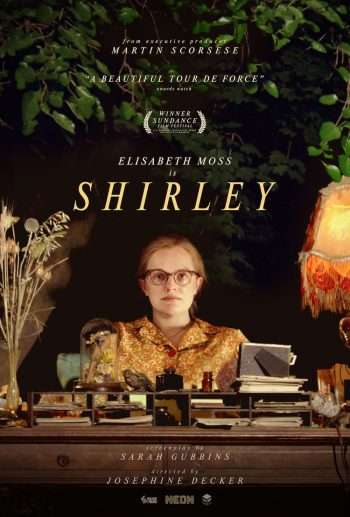 Directed by Josephine Decker (Madeline’s Madeline) and executive produced by Martin Scorsese, Shirley centers on the relationship between author Shirley Jackson (Elisabeth Moss) and her professor husband Stanley (Michael Stuhlbarg). The story is inspired by Susan Scarf Merrell’s novel of the same name.

Jackson is facing a bit of writer’s block after the publication of The Lottery, but when a newlywed couple (Logan Lerman, Odessa Young) enters her life, a new burst of creativity awakens.

Thanks to the Netflix series The Haunting of Hill House and to a lesser extent 2018’s We Have Always Lived In A Castle, Jackson’s popularity has not waned with avid readers.

Shirley hits VOD and drive-in theaters on June 5. The feature premiered at the Sundance Film Festival to great reviews (it currently has a 97% rating on Rotten Tomatoes).