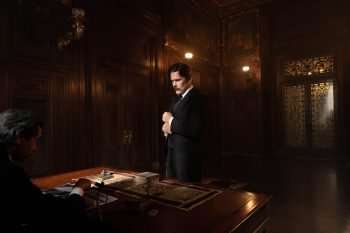 Ethan Hawke has previously worked with filmmaker Michael Almereyda in Hamlet and Cymbeline, and now he takes on the role of visionary Nikola Tesla in Almereyda’s latest feature Tesla.

The feature centers on Tesla’s against all odds battle to bring his revolutionary electrical system to the world. Kyle MacLachlan co-stars as Thomas Edison, with Jim Gaffigan playing Tesla’s patron George Westinghouse. Tesla won the Alfred P. Sloan Feature Film Prize at the 2020 Sundance Film Festival. Hawke was seen last year in The Truth, The Kid, and Adopt A Highway.

In the following Vulture interview, Almereyda talks about how Tesla was originally a project set for Jack Nicholson:

Tesla comes out in theaters and On Demand August 21 via IFC Films. Are you excited for Hawke and Almereyda’s latest collaboration? Feel free to comment and share your thoughts!