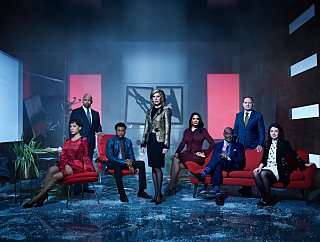 Since The Good Fight is streaming off-network, it hasn’t had to worry as much about being shackled by political correctness. The show’s production team and stars have been pretty outspoken in their disdain for Donald Trump and his presidency, and it certainly shows in the show’s plots and scripts. Airing its fourth season during a pivotal, polarizing election year, you can expect the show will continue to focus on the way many established practices in American government and politics have broken down over the past several years. Executive producer/Creator/Writer Robert King, along with stars Delroy Lindo and Audra McDonald, told us they’re hoping to show the audience how justice in America has been eroding under the current administration. (Click on the media bar below to hear Robert King, Delroy Lindo & Audra McDonald)

The Good Fight is streaming on CBS All Access, with new episodes premiering on Thursdays.