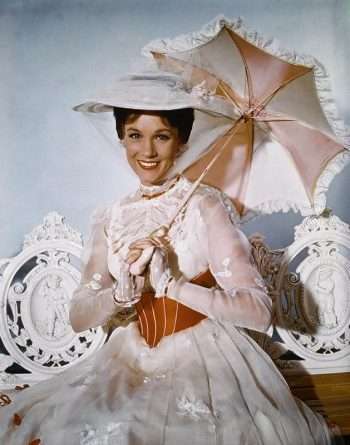 For a studio whose bread and butter had been animated films, Mary Poppins marked a real turning point for Disney in 1964. Its mix of live-action and animation was a huge box-office hit and a critical darling, earning the film 13 Academy Award nominations, a number that hadn’t been matched by any previous Disney movie and hasn’t been matched since. (It was also the only Disney release to earn a Best Picture nomination during studio founder Walt Disney’s lifetime.) The movie won five of those Oscars, including a Best Actress trophy for silver screen rookie Julie Andrews. These days, that kind of performance would earn the film an instant greenlight for a sequel. And Mary Poppins did wind up getting a sequel — but not until 2018, 54 years after the original. Andrews told us the timeline could have been a lot different, though, had they gotten a better sequel script back in the day. (Click on the media bar below to hear Julie Andrews)

Mary Poppins and Mary Poppins Returns are both streaming on Disney+, and they’re both available for purchase on DVD, Blu-Ray, and digital platforms.