Gad Gets ‘The Goonies’ Together, And It’s Great! 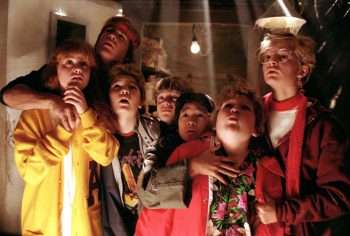 OMG … a Goonies reunion? Yes! Though, in this case, “OMG” stands for “Oh My Gad,” as Frozen star Josh Gad managed to get the entire Goonies crew — including all of the main cast members, Steven Spielberg, Richard Donner, and even theme song singer Cyndi Lauper together for a socially distanced online reunion special called Together Apart. Have fun watching the cast members re-enact some of the classic scenes from the movie, and hear them talk about plenty of other stuff, including whether a sequel is still a possibility. Of course, the reunion was only virtual, given California’s stay-at-home requirements right now, but even that, as Lauper sang, is good enough for us.
Find Us On Facebook: Hollywood Outbreak
Follow Us On Twitter: @Hollyoutbreak