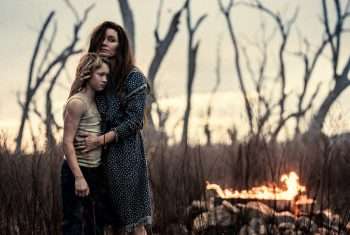 Based on Peter Carey’s novel, True History of the Kelly Gang centers on the life of Ned Kelly (George MacKay), the outlaw who has become an iconic figure in Australia. As Kelly and his gang fight oppression from authorities, they deal with their challenges. Ned lost his father Red (Ben Corbett) at an early age (Orlando Schwerdt plays Ned as a kid), and he holds a close knit yet complicated relationship with his survival at any cost mother Ellen (Essie Davis).

Davis, whose work includes The Babadook and more recently Miss Fisher & The Crypt of Tears, had nothing but praise for True History of the Kelly Gang filmmaker Justin Kurzel. Since Kurzel is also Davis’ husband, one would assume that praise would be glowing (“he’s one of the greatest directors I’ve ever worked with). That said, True History of the Kelly
Gang is an oustanding narrative that succeeds as both a visually immersive experience and a fully fleshed out tale.

Part of the film’ creative success lies in Kurzel’s attention to detail. “Each actor has a manifesto of what they should do to prepare for their role,” said Davis. “It is shape shifting. It is watching, listening to trying on, buying new boots and wearing those. It’s what to eat and what to watch. Who to emulate, who to befriend. It’s a manifesto that’s five pages long of what everything you could do to prepare for the role.

After shooting True History of the Kelly Gang, Davis immediately dived in to work on Miss Fisher & The Crypt of Tears. Click on the media bar to hear Essie Davis talk about how she finds that energy and passion as an actress.