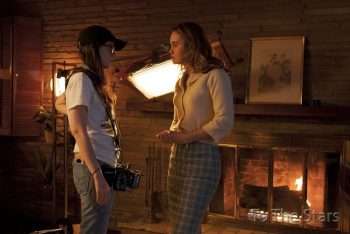 Directed by Martha Stephens (Land Ho!), To The Stars centers on Iris (Moonrise Kingdom’s Kara Hayward), an introverted teenager who is having her share of trouble in high school. When a new girl named Maggie (Liana Liberato) comes into town (the feature is set in early 1960s Oklahoma), Iris creates a bond that makes a deep impression in her life.

Shot in just 20 days, the indie film is, along with its visually rich compositions, is filled with excellent performances. Both Liberato and Hayward deliver lived in performances as the teenagers yearning to break free from their respective constraints, and Adelaide Clemens is also memorable as a hairdresser who forms a connection with Maggie.

To achieve the look for To The Stars, Stephens was inspired by classic films of yesteryear. “I think that with this movie we were looking at things like Douglas Sirk and his melodramas (Sirk directed Written on the Wind and All The Heaven Allows),” said Stephens. “Obviously we were looking at The Last Picture Show but even Frankenstein. There’s a mob mentality in the movie that isn’t too far from a monster film from yesteryear. A sense of place is definitely what I yearn for when I’m watching a movie. I want to be transported to a different world. The attention to detail that the whole crew paid to the characters and their backstories and how that can show up on screen – the little touches you notice. That’s a whole cohesive thing.”

Click on the media bar to hear Martha Stephens talk about her journey in finding the right location for To The Stars (the feature was shot in Enid, Oklahoma).

To The Stars hits digital on April 24 via Samuel Goldwyn Films.