Royal Recall: When Cedric The Entertainer Was A ‘King’ 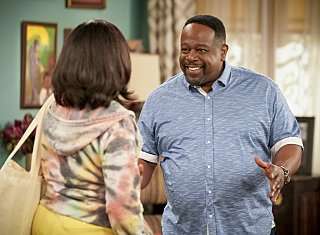 “Welcome to the Standoff” – Pictured: Cedric the Entertainer (Calvin Butler). A surprise delivery prompts Dave and Gemma, as well as Calvin and Tina, to examine the power dynamics in their respective relationships, on THE NEIGHBORHOOD, Monday, April 13 (8:00-8:30 PM, ET/PT) on the CBS Television Network. Photo: Ron P. Jaffe/CBS ©2020 CBS Broadcasting, Inc. All Rights Reserved.

In 2000, Spike Lee chronicled the hottest African-American comedy tour on the road with a concert film, The Original Kings of Comedy. It featured four men who would go on to become household names: Steve Harvey, D.L. Hughley, Cedric the Entertainer, and the late, great Bernie Mac. All of them went on to have their own network sitcoms, in part because of the exposure they got from the film. Cedric the Entertainer, who currently stars in The Neighborhood, told us the movie and the tour were an amazing, life-changing experience for hum and the others. (Click on the media bar to hear Cedric The Entertainer)

The Neighborhood airs Mondays at 8/7c on CBS.