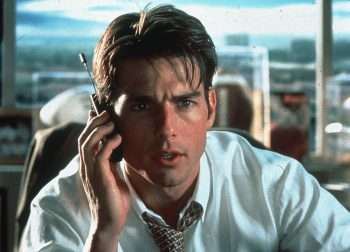 Cameron Crowe, as you may know, was the youngest writer ever to get pieces in Rolling Stone magazine during its heyday, something he chronicled so perfectly in his film Almost Famous. Crowe’s most famous movie, though, was Jerry Maguire. With its instantly memorable catchphrases — “You had me at hello,” “You complete me,” and of course, “Show me the money!” — the inside look at the life of a sports agent was a huge hit at the box-office and a critical favorite as well, earning five Oscar nominations, including Best Picture. Tom Cruise, of course, starred as the movie’s namesake and won a Golden Globe for his efforts. Jerry Maguire was the first collaboration between Cruise and Crowe: Cruise later starred in Vanilla Sky and was a producer for Elizabethtown. It wasn’t surprising that the two wound up working together again — while promoting Jerry Maguire, Cruise told us he had an amazing experience working with and getting to know Crowe. (Click on the media bar below to hear Tom Cruise)