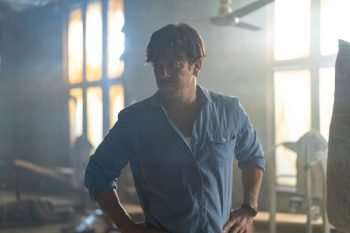 Almost Paradise centers on Alex Walker (Christian Kane), a former DEA agent who moves to the Philippines and opens up a gift shop. HIs quest for tranquility is thwarted after he ends up aiding the local police (Samantha Richelle, Arthur Acuña) to rid the streets of crime.

A melange of comedy, drama and action, Almost Paradise is produced by Dean Devlin, a person Kane cites as one of his best friends. Part of that bond comes from a working relationship that spans three television shows.

“We both are cut from the same cloth,” said Kane. “It’s so much fun to work with someone like that because the reason I became an actor was to do stuff exactly like Leverage, exactly like The Librarians, and exactly like Almost Paradise. So when I get to do something I absolutely love, to get to do it on terms that I want – I just looked out by meeting this man. He’s my boss and he’s also one of my best friends. It doesn’t get much better than that.”

Click on the media bar to hear Kane talk about the emotional layers that are part of Alex Kane’s persona: