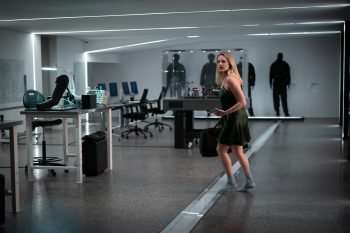 Elisabeth Moss as Cecilia Kass in “The Invisible Man,” written and directed by Leigh Whannell.

When he was working on The Invisible Man, writer-director Leigh Whannell’s No. 1 goal was to make a movie that would both scare and entertain you. As he was working on the script, he noticed that while his story definitely had the thrills and chills he was looking for, there was a lot more to it. He told us he’s proud of all of the themes and messages that made it into the movie, and he was grateful to have a star like Elizabeth Moss, whose input he considered essential to the process. (Click on the media bar below to hear Leigh Whannell)

With its theatrical run cut short, The Invisible Man is now available for streaming rentals on demand.