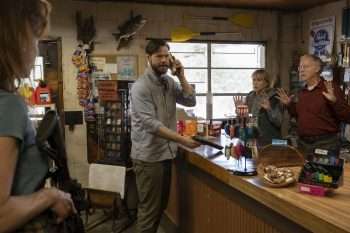 Directed by Craig Zobel (Compliance), The Hunt centers on twelve strangers who are placed in a clearing with no idea how they got there. Eventually they realize that their time on Earth may be coming to an end, as each of them become the target of a bloody and deadly game of survival! The feature co-stars Emma Roberts and Hilary Swank.

One of the draws for The Hunt co-star Ike Barinholtz was the screenplay which was penned by Damon Lindelof and Nick Cuse (the pair have worked together as producers on The Watchmen and The Leftovers). “When you read the script and you see how (Lindelof) and Nick Cuse have kind of woven in the meta-political societal moments combined with the action, combined with the humor – very few people could do it the way he did it, I think.”

Click on the media bar to hear Barinholtz talk about the “joy” of being part of The Hunt:

The Hunt is currently playing in theaters, but Universal Pictures has made the decision to have the movie available for streaming starting this Friday.