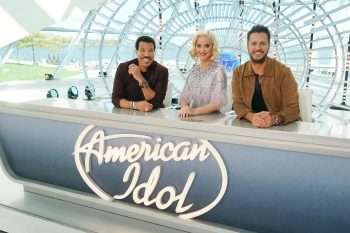 AMERICAN IDOL – ÒAmerican IdolÓ returns to ABC for season three on SUNDAY, FEB. 16 (8:00-10:00 p.m. EST), streaming and on demand, after dominating and claiming the position as SundayÕs No. 1 most social show in 2019. Returning this season to discover the next singing sensation are music industry legends and all-star judges Luke Bryan, Katy Perry and Lionel Richie, as well as Emmy¨-winning producer Ryan Seacrest as host. Famed multimedia personality Bobby Bones will return to his role as in-house mentor. (ABC/Eric McCandless)
LIONEL RICHIE, KATY PERRY, LUKE BRYAN

Since its premiere back in the summer of 2002, American Idol has run for 18 seasons, and it’s run through 14 different judges. But through all those years of changing trends, changing personnel, and even changing networks, judge Katy Perry says one thing has remained exactly the same: the goals that she and her fellow judges, Lionel Richie and Luke Bryan, have for the show. (Click on the media bar below to hear Katy Perry)