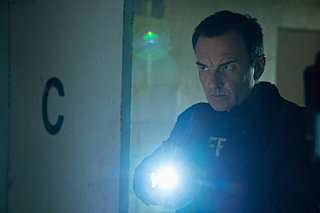 “Ghosts” – After the disappearance of his daughter is ignored by local police, a Native American man decides to take matters into his own hands. When his search escalates to murder, the team must track him down before his crusade claims any more live, on FBI: MOST WANTED, Tuesday, March 10 (10:00-11:00 PM, ET/PT) on the CBS Television Network. Pictured Julian McMahon as Jess LaCroix Photo: Mark Schäfer/CBS ©2020 CBS Broadcasting, Inc. All Rights Reserved.

As the star of FBI Most Wanted, Julian McMahon has now joined the procedural elite. No other producer on television these days has the procedural pedigree of Dick Wolf, who’s created the entire Law & Order universe, the Chicago family of shows, and now FBI and McMahon’s spinoff series. McMahon told us he’s happy to be on the team, especially since he’s been a big fan of Wolf’s and the crime procedural drama through the years. (Click on the media bar below to hear Julian McMahon)

FBI Most Wanted airs Tuesdays at 9/8c on CBS.