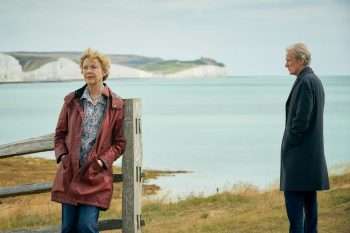 Director/writer William Nicholson’s feature Hope Gap centers on Grace (Annette Bening), a woman whose life is turned upside down after her husband Edward (Bill Nighy) asks for a divorce. Their son Jamie (Josh O’Connor) becomes their mutual support as the pair gradually go their separate ways.

The tale is inspired by Nicholson’s recollections of his parents’ divorce, and this feature is his first directing effort since 1997’s Firelight. With such scripts as Shadowlands (based on his own play), Gladiator and Elizabeth: The Golden Age under his belt, Nicholson is a revered scribe and his Hope Gap screenplay is perceptive to the core. The feature is essentially a three-hander, and each actor delivers solid work in their respective roles.

During the first act of Hope Gap, Grace is verbally confrontive of Edward, who doesn’t fight back whatsoever. Although I initially thought Grace’s aggression may have been a huge proponent behind the breakup, there is much more layers to uncover in the story (one empathizes with Grace as the story progresses). During our chat, Nicholson talked about the “gender divide” that he’s witnessed from audience members who are experiencing Grace and Edward’s relationship: