Director Matt Ratner Reflects On Landing Billy Crystal For ‘Standing Up, Falling Down’ 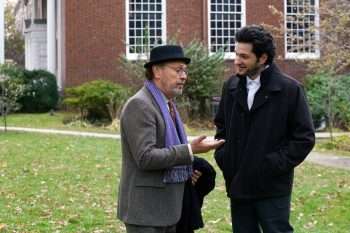 Directed by Matt Ratner, Standing Up, Falling Down centers on Scott Rollins (Ben Schwartz), a struggling comedian who leaves Los Angeles and moves back home with his parents (Debra Monk, Kevin Dunn). Scott’s unlikely friendship with a dermatologist (Billy Crystal) helps give him a bit of clarity regarding his own life and career. Eloise Mumford co-stars as Scott’s ex-girlfriend Becky, who has since moved on and married a mutual friend.

Since the film is headlined by Crystal and Schwartz, one may assume the story features its share of improvisation.

“Ben and Billy, in addition to being very talented actors, they’re brilliant writers,” said Ratner. “To be able to work with them and work with Peter and find their voices in these characters – it meant that a lot of the improv happened before we started shooting. Once we shot, there were definitely things that changed. Any time an actor felt (the scene) wasn’t truthful, I would always tell them to talk to me about it and (we would) try to make it feel more organic.”

Click on the media bar to hear Ratner discuss his first face to face meeting with Billy Crystal for the project:

Standing Up, Falling Down, co-starring Caitlin McGee and Grace Gummer, hits theaters and On Demand February 21.