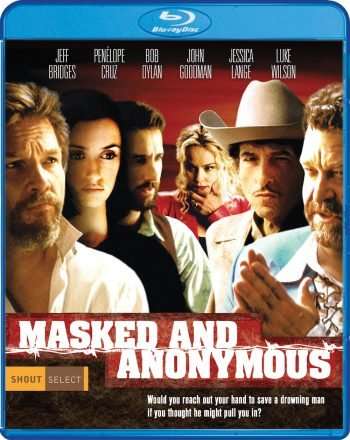 Music icon Bob Dylan has dabbled now and again with movies (Renaldo and Clara, Pat Garrett and Billy the Kid) and his 2003 collaboration with director Larry Charles (Borat) is finally making its way to Blu-ray on March 10 as part of the Shout Select line.

The narrative centers on Jack Fate (Dylan), a troubadour who is spring from jail to topline a concert whose proceeds are allegedly going to poverty relief. The picture, co-penned by Dylan and Charles (both using a different pseudonym), is a freewheeling romp that received its share of mixed reviews upon its release. As with most of Dylan’s work, however, this project should merit a deeper look, and an all-star cast (John Goodman, Jeff Bridges, Penelope Cruz, Jessica Lange, Luke Wilson, Mickey Rourke, Bruce Dern) should help the proceedings.