Alex Kurtzman: ‘Picard’ Had To Show A Different Side Of ‘Star Trek’ 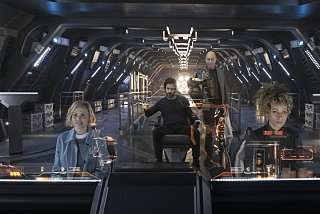 As the Star Trek universe continues to expand, the producers and writers have been very aware of one basic rule — if they cannot boldly go where no Trek show or movie has gone before, well, that starship won’t fly. That was especially true when they were developing Star Trek: Picard, since they were already bringing back a beloved character who’d already had seven seasons on television and four films. Co-creator and executive producer Alex Kurtzman told us that, as they worked on the premise and plot of Picard, everybody involved — especially star Patrick Stewart — wanted the show to be radically different from The Next Generation. (Click on the media bar below to hear Alex Kurtzman)

Star Trek: Picard is streaming now on CBS All Access, with new episodes available every Thursday.

With ‘Remorse,’ Michael B. Jordan Elevates Its...