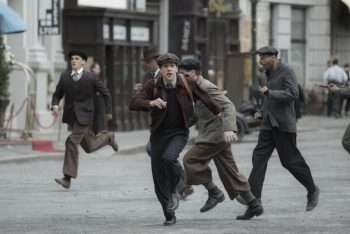 Jesse Eisenberg, seen last year in The Art of Self Defense and Zombieland: Double Tap, will play French mime Marcel Marceau in the WWII drama Resistance. The narrative centers on the true story in which a group of Girls and Boy Scouts created a network that saved the lives of ten thousand orphans during the wear.  Marceau, an aspiring Jewish actor at the time, was among the individuals who aided the French Resistance in helping save these children from the Holocaust.

The picture, which also stars Ed Harris and Edgar Ramirez, is directed by Jonathan Jakubowicz, the filmmaker behind the underrated boxing feature Hands of Stone (which featured Ramirez as pugilist Roberto Duran). Check out the trailer and tell us what you think!