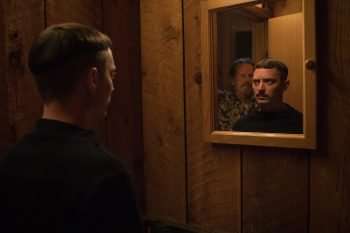 If you’re in the mood for a twist driven thriller that also has a bit of emotional resonance, Come To Daddy fits the bill. Elijah Wood delivers a first rate performance as Norval, a guy who reunites with his estranged father (Stephen McHattie). Their meeting,however, is not filled with love or the slightest of affection, and Norval wonders why his dad extended an invite via an emotional letter.

The first section of the film is a two hander, as we delve into the motivations of both father and son. Director Ant Timpson, working from Toby Harvard’s script, turns the movie on its head by the second act, turning the picture into a suspense thriller that exceeds expectations. Other films covered on the latest episode include Birds of Prey, Downhill, and the new Billy Crystal film Standing Up, Falling Down.

Take a listen to this month’s episode of CinemAddicts:

Come To Daddy is now playing in theaters and is available On Demand.