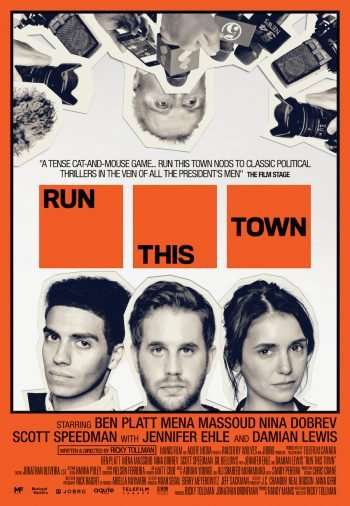 In Run This Town, Tony award winning actor Ben Platt (Dear Evan Hansen) plays Bram, a journalist who is tired of penning puff pieces and is focused on doing more serious investigative work. Upon accidentally discovering scandalous details on Toronto’s mayor Rob Ford (Damian Lewis), Bram may have the story that could put his career literally and figuratively on the front page.

NIna Dobrev, seen last year in the underrated Lucky Day, and Mena Massoud star as Ford’s aides, with vets Jennifer Ehle and Scott Speedman rounding out the ensemble as Bram’s editors. Ford, who was elected mayor in 2010, passed in 2016 after a bout with cancer.

The subtle trailer plays into the fictionalized tale’s thriller elements sans giving away explicit details of the narrative.

Run This Town, penned and directed by Ricky Tollman, hits theaters, On Demand, and Digital on March 6. Check out the trailer and tell us what you think!