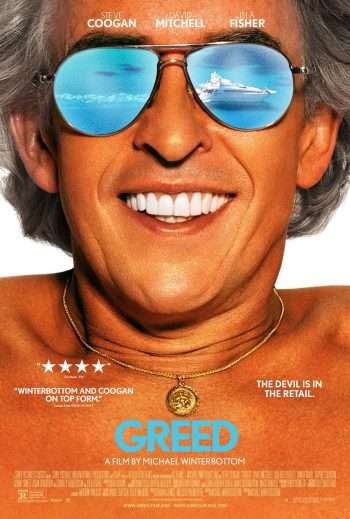 Steve Coogan, who delivered a first rate performance last year as Stan Laurel (Stan & Ollie), plays a narcissistic British billionaire named Sir Richard McCreadie in Greed. For over 30 years, McCreadie was a retail fashion king, but times have changed and his reputation has taken a hit. To regain public favor, McCreadie organizes a lavish party on the Greek island of Mykonos to celebrate his 60th birthday.

Even though he throws as much money as possible for the celebration, things immediately go south. Asa Butterfield and Isla Fisher co-star in the comedy which has Coogan once again working with director Michael Winterbottom (director of The Trip films).

Since the Coogan/Winterbottom collaboration has been fruitful beyond belief, it will be interesting to see how the comedy shines outside The Trip universe (the duo are currently in production of The Trip to Greece). Check out the trailer and tell us what you think!

Greed opens in New York and Los Angeles on February 28.