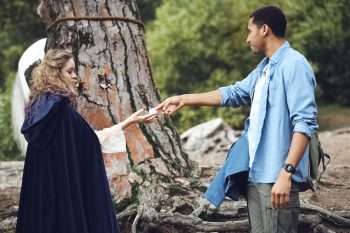 There is a lot to unpack, in a good way, regarding Color Out of Space. First off, it marks the return (at least big screen wise as he’s directed documentaries) of Richard Stanley.  A former cinematic wunderkind (Hardware, Dust Devil), Stanley’s career took a drastic turn after being fired from The Island of Dr. Moreau (that experience is spotlighted in the acclaimed documentary Lost Soul: The Doomed Journey of Richard Stanley’s Island of Dr. Moreau). Secondly, the movie, along with featuring another first rate Nicolas Cage performance, is also an immersive cosmic horror tale that will garner its share of fans.

Madeleine Arthur (To All The Boys I Loved Before, Big Eyes) co-stars as Lavinia Gardner, daughter to Nathan (Cage) and Theresa (Joely Richardson), and she also delivers a powerful and emotionally wrenching performance.

“I wasn’t super familiar with his work prior to the movie but now am one of the biggest Richard Stanley fans,” said Arthur. “It’s such a pleasure, a treat and an honor to be part of his first feature in so many years. Fans of Richard’s work will see some of his signature elements and I’m really excited for everyone to see all of those moments as well.”

Click on the media bar to hear Madeleine Arthur talk about going toe-to-toe with Nicolas Cage in Color Out of Space:

Hugh Bonneville: Why Downton Abbey Is A...

Back To ‘Jurassic,’ Sam Neill Promises A...

As A Director, Sam Raimi Had His...