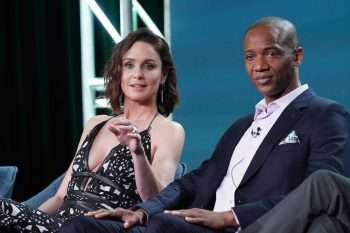 Sarah Wayne Callies (Colony, Prison Break) has starred in her share of successful shows, and with the upcoming Council of Dads she is venturing into the family drama genre. Inspired by Bruce Feiler’s book, Council of Dads centers on a Scott (Tom Everett Scott) and Robin Perry (Callies), a couple who open up their family to close friends  after Scott is diagnosed with cancer.

During our interview with Callies, the actress candidly pointed out one reason for her success in the entertainment industry.

“They saw a young white woman and that’s not hard to write for in television. If I had been a woman of color, my career would have been massively different,” said Callies who also had an acclaimed run on The Walking Dead. “And so it’s incumbent upon me now that I am writing, producing, and directing – to write roles for women of color and to try and bring women in whose voices have not been heard.

Click on the media bar to hear Callies discuss why it’s an “honor” to be a part of Council of Dads:

Jane Levy’s Got A Few Suggestions For...

Zoey's Extraordinary Playlist could conceivably be described as a mash-up of Glee, which used known songs to build a buzz, and Crazy Ex-Girlfriend, which...
Read more

When It Came To Learning, Wilmer Valderrama’s...

Wilmer Valderrama was an unknown teenager when he was cast in the role of a foreign exchange student (hence the nickname "Fez") on That...
Read more