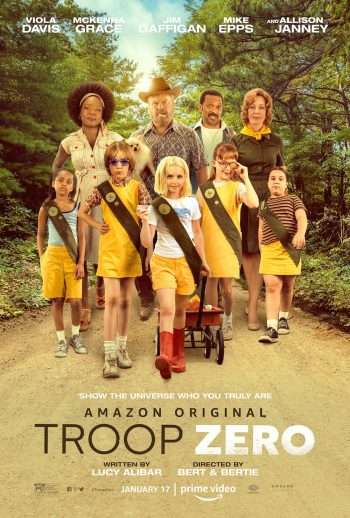 Troop Zero centers on Christmas Flint (Mckenna Grace), an eccentric girl who dreams of connecting with life forms in outer space. A competition that gives Birdie Scouts a chance to record their voices on NASA’s Golden Record inspires her to form a makeshift troop. Co-starring Viola Davis, Jim Gaffigan, and Allison Janney, this 1977 feature is a feel good film that, although it has its humorous moments, is also grounded in reality.

During my interview with filmmakers Bert & Bertie, I asked them about their approach to filmmaking (the script is penned by Beasts of the Southern Wild scribe Lucy Alibar). “We always put the story first,” said Bert. “When you’re collaborating, it’s what best serves the story. We come at it with different ideas and a lot of ideas that are very much the same but when you’re trying to decide which you’re moving, it’s a lot about instinct and that means what does this story need from us? And that’s what we used to move forward.”

Click on the media bar to hear Bertie talk about the meticulous planning that went into making Troop Zero.