Matthew McConaughey Influenced By The “Eye For Detail” Behind ‘The Gentlemen’ 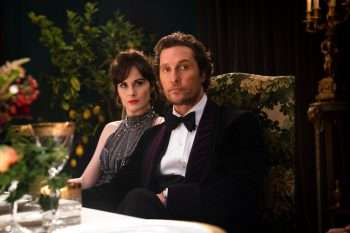 Director Guy Ritchie (Aladdin) returns to his adrenalized gangster based roots (Snatch, RockNRolla) with The Gentleman. The feature centers on Mickey (Matthew McConaughey), an American expat who heads a money making marijuana empire in London. When rumors surface that he may be selling off his business, a plethora of predators attempt to muscle in on his territory.

Colin Farrell, Hugh Grant, Michelle Dockery, Henry Golding, and Charlie Hunnam (who worked with Ritchie in King Arthur: Legend of the Sword) are just several of the A-list talent featured in the ensemble.

Click on the media bar to hear McConnaughey discuss who he was influenced by director Guy Richie’s “eye for detail” and style during the making of the film.

The Gentlemen, which is also penned and produced by Ritchie, hits theaters January 24.