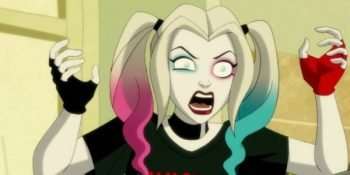 Warner Brothers Studios certainly has a history when it comes to animation. So, when it came to making an animated version of Harley Quinn, the WB team put a lot of its DNA into the show, giving it kind of a classic cartoon feel. When Kaley Cuoco, who voices Harley and is a producer on the show, saw the ideas they had come up with for the look of Harley Quinn, was there anything she wanted to change? (Click on the media bar below to hear Kaley Cuoco)