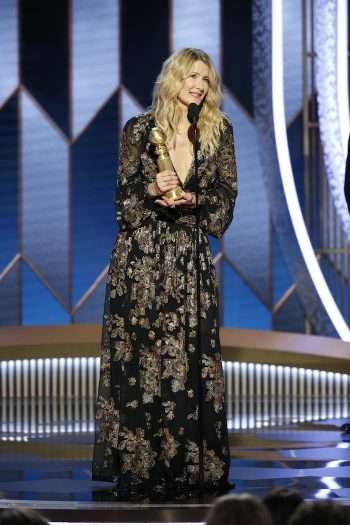 Laura Dern received her fifth Golden Globe Award for her work in director Noah Baumbach’s acclaimed Marriage Story. Playing a divorce attorney who will do everything in her power to get the best deal for her client (Scarlett Johansson),

The actress, who has collaborated with her share of visionary filmmakers (Steven Spielberg, Mike White, Alexander Payne), had high praise for Baumbach’s script. “I have never read a more perfect screenplay in my life. Every moment is seamlessly directed on the page . . .It’s just meticulous,” said Dern. “It’s like mastery playwrighting. As a cast, we know how incredibly lucky we are to be with that level of screenwriter and directing.”

Marriage Story is partly inspired by Baumbach’s marriage to actress Jennifer Jason Leigh (he is married to filmmaker Greta Gerwig). Click on the media bar to hear Dern elaborate on why Marriage Story was a “deeply personal” story for her and various members of the cast and crew.

Laura Dern can also be seen in Little Women, a feature directed by Gerwig.