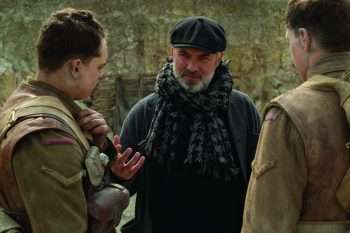 For Sam Mendes, 1917 is a real passion project Based on a real-life story his grandfather told him, Mendes is a producer on the film, directed it, and co-wrote it as well. He was able to deliver the exact vision he wanted for the film, and he told us that by shooting the movie as a story that takes place in real time, he wants audiences to feel like they’re on the characters’ mission with them. (Click on the media bar below to hear Sam Mendes)

1917 is now playing in selected theaters; it will get a wide release on January 10.