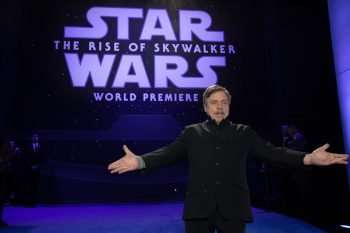 From the start of the series to The Rise of Skywalker, the Star Wars films have spanned 42 years — three generations. The staggered release of the movies, with at least one each decade since the 1970s, has kept the film’s audience engagement strong. But Mark Hamill, who appeared in Episodes IV-IX as Jedi legend Luke Skywalker, thinks fans would still be crazy about the original trilogy even without the prequel and sequel films, because the films’ reputation has given them “must-watch” status for every new generation of movie fans … and Hamill told us he had a really good feeling about them right from the start. (Click on the media below to hear Mark Hamill)

Star Wars: Episode IX – The Rise of Skywalker is available for purchase on digital platforms.