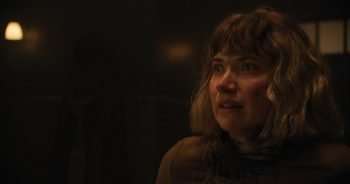 December movies are usually relegated to holiday themed films (especially if they are on Netflix) or Oscar awards level type of narratives. But if you’re looking for an escapist horror feature, Black Christmas may do the trick.

Since its part of the Blumhouse Productions roster, Black Christmas has a shot of making a lasting impression,. A remake of the 1974 slasher flick, Black Christmas centers on a black-masked stalker who is killing sorority women at Hawthorne college. Directed by Sophia Takai (Always Shine), the feature is headlined by Imogen Poots (Green Room) as the sorority sister who suspects that this killer may actually be a series of murderers. Rounding out the ensemble are Lily Donoghue (Jane the Virgin), Aleyse Shannon (Charmed) and Brittany O’ Grady (The Messengers), and Cary Elwes (The Princess Bride). Black Christmas opens nationwide December 13.

Other films discussed in the latest episode of CinemAddicts include Seberg and Uncut Gems. Take a listen below!