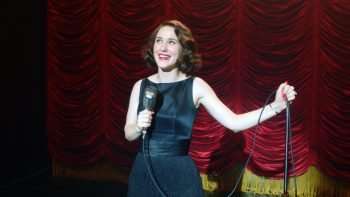 In its first two seasons, the acclaimed Amazon series The Marvelous Mrs. Maisel has claimed an incredible 16 Primetime Emmy Awards (out of an otherworldly 34 nominations). Rachel Brosnahan got one of those Emmys for playing the show’s title character, a 1950s housewife who takes up stand-up comedy. Those first two seasons will be a tough act to follow, but Brosnahan believes the show has done it admirably — in particular, she feels like her character’s got an incredible story arc in this new season. (Click on the media bar below to hear Rachel Brosnahan)

Season 3 of The Marvelous Mrs. Maisel is now streaming on Amazon Prime Video

WarnerMedia is bringing the adrenaline-fueled, award-winning British game show reboot of The Cube stateside with a series order, executive produced and hosted by NBA legend Dwyane Wade. The...
Read more

In its first season on Netflix, The Umbrella Academy became a fan favorite, with a large following of devoted fans waiting to find out...
Read more

As someone who's always been musically inclined, Dakota Johnson has usually made music part of her routine for mentally preparing herself for her acting roles....
Read more

Katie Holmes chose to take a role in The Secret: Dare to Dream in part because she was a huge fan of the self-help book upon...
Read more

For Guillermo Diaz, playing Huck on Scandal was a career-defining role. He'd gotten a lot of work before, but Huck was arguably the first...
Read more

For a pair of time travelers who've hopped throughout history, 2020 might seem to be an odd destination. But, as fate would have it,...
Read more