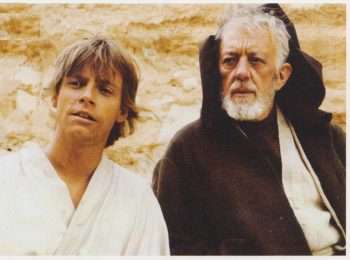 When he made the first Star Wars movie, Mark Hamill was still a fresh-faced kid with a limited résumé, mostly made up of guest-starring roles on TV shows. Now known as Episode IV: A New Hope, the original Star Wars would prove to be the movie that propelled Hamill to full-fledged Hollywood stardom. In the film, he worked alongside Sir Alec Guinness, who was a 62-year-old Oscar-winning veteran of both stage and screen. Though Guinness famously wasn’t a fan of Star Wars as it was being shot — the letters he wrote about it, in retrospect, are pretty hysterical — Hamill remembers having a great time with the British actor, who he’d counted as one of his acting heroes. When we spoke to Hamill, he talked about the special relationship the two men developed on the set.  (Click on the media bar below to hear Mark Hamill)

Star Wars: The Rise of Skywalker opens in theaters on December 20.