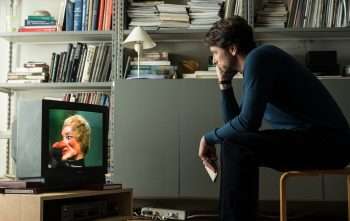 A Beautiful Day in the Neighborhood centers on Lloyd Vogel (Matthew Rhys), a jaded journalist whose life takes a turn for the better after doing a profile piece on Mister Rogers (Tom Hanks). Marielle Heller, who previously helmed Can You Ever Forgive Me?, directs the fact-based feature (it’s inspired by journalist Tom Junod’s own friendship with Rogers).

“His greatest message was to listen to the other person,” said Rhys. “As a result of that, other things can unfold. If you listen properly, then empathy could follow And I think, and I include myself in this, (Lloyd Vogel’s) ability to listen has veered from the path.”

Click on the media bar to hear Matthew Rhys discuss the “alchemy” behind Tom Hanks’ performance as Mister Rogers: