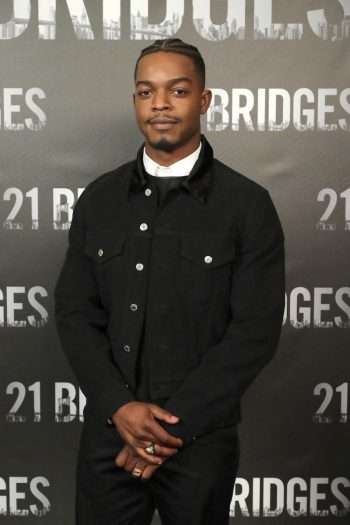 Stephan James made a big splash last year with his work in If Beale Street Could Talk and the Prime Video series Homecoming, and now he plays Michael, a cop killer who’s being tracked down by a NYPD detective (Chadwick Boseman) in 21 Bridges. Taylor Kitsch co-stars as Ray, Michael’s partner-in-crime.

“Everyone loves a good crime action thriller,” said James, who also played Jesse Owens in the underrated biopic Race. “For me, some of my favorite movies growing up was Heat, Reservoir Dogs is like top 3 of all time. I feel like this film had elements of that and everything I loved about a good crime thriller and no one has seen me doing anything like that. For me, it was really a cool thing to be a part of (21 Bridges).”

Directed by Brian Kirk (Hard Sun), the feature takes place during one tense evening in New York, and to bring authenticity to the project officers were employed to give the actors insight on how to physically approach their respective roles.

Click on the media bar to hear James talk about the tactical training that was utilized in 21 Bridges (Kitsch can also be heard in the clip):