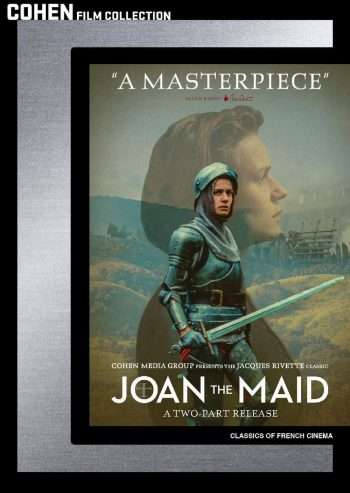 Joan The Maid, a two-part epic that centers on the life of Joan of Arc (Sandrine Bonnaire), hits Blu-ray, DVD, and digital platforms on December 3 via the Cohen Film Collection.

Directed by Jacques Rivette (La Belle Noiseuse, Celine and Julie Go Boating), the feature is being released with a new 4K restoration of the 1994 feature. Joan The Maid: The Battles, centers on Joan’s experiences on in war as the French battle against the English. The second installment (Joan The Maid: The Prisons) centers on Joan’s final two years of life. Bonnaire received a César Award nomination for her work in the second installment.

Though its 336 minute run time is intimidating, the film is lensed by  William Lubtchansky, a cinematographer who, along with his Rivette collaborations, has also worked with directors Francois Truffaut, Jean-Luc Godard, and Agnés Varda.

Bonus features on the set include the original and re-release trailers.